Avengement — A barrage of unruly whims that happens upon a strong, bloody finish

Try hard Scott “look-I’m-acting-here” Adkins and director Jesse V. “I-got-themes” Johnson are back again. These two gents have seemingly found each other in their love for brutish knucklehead machismo mysticism […] 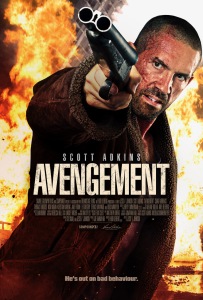 Try hard Scott “look-I’m-acting-here” Adkins and director Jesse V. “I-got-themes” Johnson are back again. These two gents have seemingly found each other in their love for brutish knucklehead machismo mysticism bullshit and Guy Ritchie’s 90s work, and have set about to churn out a couple of brawlers a year. Unfortunately, their latest venture, Avengement, sinks like a two-barrel shotgun in a… barrel.

After the fine work in the bit too talky but enjoyable modern-day martial arts infused comic book adaptation Accident Man, and the heavy-handed symbolism “we are cattle going to slaughter” of otherwise breezy buddy bad-guy antics romp The Debt Collector, the dynamic duo stoops back to the narrative incompetent depths of their earlier collaboration, Savage Dog, sans its memorable WTF savagery and the towering presence of Cung Le and Marko Zaror.

Avengement takes aim for both cool and emotionally engaging, misses both and ends up a mess. Incessant dialogue, pointless flashback narrative structure and underdeveloped sentimental, sappy “what men put through shit become” themes clash and crash like criminal lowlifes to Adkin’s fists. More awkward than awesome, more embarrassing than heartfelt, but mostly head-scratchingly baffling for thinking it succeeds at either.

Johnson, seemingly unable to tell a propulsive story or actually a story at all, once again settles for voice-over exposition explaining everything from plot and character motivation down to feelings. Jesse V. Johnson showed promise in the wildly uneven The Butcher. While coasting all his faults on the tremendous Eric Roberts, he did seem to have a knack for offbeat characters, languid phasing, odd asides and dynamically framed action. Now years later, the things that didn’t work back then are back with a vengeance, while the good things have been ground away in favour of a polished sheen. As current era DTV/VOD material goes, his product looks robust and bears a shallow semblance of cinema.

He’s in dire need of a strong dramatic performer to pull through. Scott Adkins, though, ain’t it. Sorely lacking in charisma and with a curious strained awareness in his acting, he has trouble carrying a film on his own but explodes like a possessed man whenever fists or feet are required, always pushing himself despite increasingly slimmer budgets and tighter schedules. As one of this generation’s most gifted and hardest working on-screen martial artist, he is desperately looking for his big break and churns out more low budget quickies at a high rate in hopes something will stick. He’s still best put to use as stoic, non verbal bad guys and empty, void clone vessels.

Not getting any younger, Adkins is probably looking to transition from the flamboyant, insanely athletic strenuous work he is known for into something more manageable, and since Jesse V. Johnson is favouring a grittier, more grounded approach to fight scenes, it is obviously here, in the action department, that the collaboration is at its most fruitful.

And the prolonged fight scene towards the end of Avengement, at long last, gets things right and is quite frankly a marvel. Adkins rips into the character physically and shapes what has become of him: a filthy, bare knuckle beast. Finally displaying this transformation the movie so far has tried, and utterly failed, at portraying. There is a brutal efficiency at play, but not lacking dirt and grit, a violent, ugliness erupting. Fight coordinators Dan Styles and Luke LaFontaine have constructed a blistering, messy and dirty brutal brawl worth any action fan’s consideration. If only it had been featured in a more competent movie, something that mattered. At a brief 85 minutes, it still feels like a slog. Rough and unfinished, at every turn Avengement proudly and wrong-headedly avoids to coalesce into anything much but frustration and bafflement. Watch it for the end.